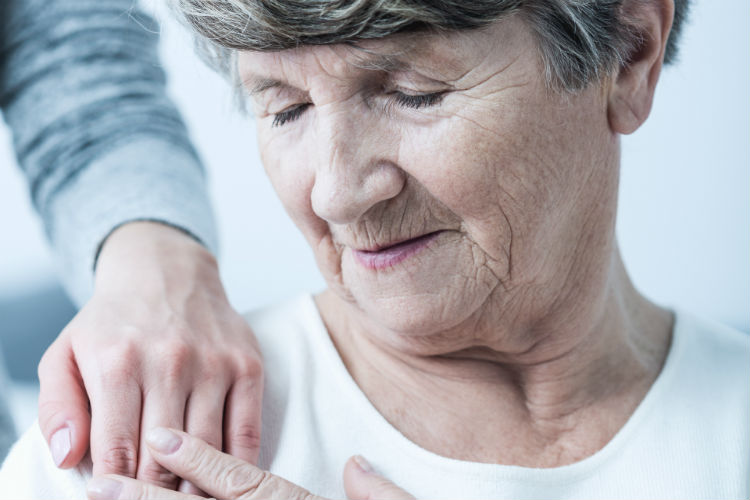 “It is not helpful to argue or rationally explain why something happened,” says Lisa P. Gwyther, associate professor in the Department of Psychiatry and Behavioral Sciences at Duke University and director of the Duke Aging Center Family Support Program. “It just frustrates the person. They somehow know that you are not taking their thoughts and feelings seriously.”

While reinforcing reality seems like the logical and kind thing to do, this natural instinct can be wrong. Family caregivers can ensure they’re prepared to handle these challenging behaviors by learning the differences between them and proper coping techniques for each one.

Hallucinations, delusions and paranoia are symptoms of disease and not a normal part of aging. While they may seem similar, they are actually very different.

Hallucinations are false sensory experiences that can be visual, auditory and/or tactile. These perceptions cannot be corrected by telling a patient that they’re not real. Examples include a dementia patient hearing music when none is playing or seeing bugs on a surface where there aren’t any.

Delusions are fixed false beliefs that are not supported by reality. They are often caused by a faulty memory. Examples include accusing caregivers of theft and infidelity.

When it comes to handling a senior’s hallucinations, Dr. Marion Somers, author of “Elder Care Made Easier: Doctor Marion’s 10 Steps to Help You Care for an Aging Loved One,” suggests joining them in their version of reality. Ask them about what they are experiencing as if it is real so that you can more effectively defuse the situation. Refrain from trying to explain that what they are seeing or hearing is all in their head. “Otherwise, you’re going to aggravate them, and you don’t want to increase the level of agitation,” says Dr. Somers.

Reassure them by validating their feelings. Say something like, “I see that you’re upset. I would be upset if I saw those things, too.” Tell them that they are safe with you and you will do whatever you can to help them feel secure.

A comforting touch, such as gently patting their back, may help the person turn their attention to you and reduce the hallucination, according to the Alzheimer’s Association. You also can suggest that they move to a different room or take a walk to get away from whatever may have triggered the experience.

Realize that some hallucinations, such as seeing children or hearing music, can be comforting. If the individual is reassured by a hallucination, caregivers don’t need to do anything to stop it, Gwyther says. “You only need to respond to things that are scary or disruptive or keep the person from getting adequate care,” she says.

In addition to dementia, poor eyesight, hearing loss, certain medications, and physical problems like dehydration and urinary tract infections (UTIs) can contribute to hallucinations. If all other factors are ruled out and a loved one’s hallucinations are disturbing and persistent, then antipsychotic medication may be prescribed to reduce them. However, Gwyther says these medications can present a risk for dementia patients. She recommends first changing the way you communicate during these episodes and changing the activity and environment to remove or reduce triggers.

The Alzheimer’s Association offers these tips to change the environment:

Delusions among dementia patients typically result from their cognitive impairment. They occur when a senior tries to make sense of a situation, but their confusion and memory problems make it impossible. “They end up filling a hole in a faulty memory with a delusion that makes sense to them,” Gwyther says. For example, if a loved one cannot find their purse, they may decide that it is missing because someone stole it.

Delusions can be frightening for the person living with dementia, but they can also be very hurtful for caregivers when they are the accused. Recognize that the elderly individual is living in a world that doesn’t make sense to them and is likely scared. Do not take any accusations personally or respond with logical explanations. Instead, reassure the person and avoid asking questions that may cause more confusion. If they are looking for an item, tell them you will help them find it. In cases where a loved one regularly misplaces an item and becomes agitated over the loss, the Alzheimer’s Association recommends purchasing a duplicate of the item to quickly resolve the issue until the original is found.

Distraction is another strategy that dementia caregivers use in response to delusional thinking, but it may not work for every patient or every delusion. If a loved one is experiencing a mild delusion, offering a favorite snack or activity or asking them to tell you about an important experience in their life may be sufficient to redirect their attention. In cases where the person is very upset, reassurance may be the only viable option. Again, it is crucial to avoid rationalizing the situation and stress your commitment to their security and happiness.

Paranoia is less common than delusions and hallucinations but can still be very troubling. According to the Alzheimer’s Association, when paranoia occurs, caregivers can assess the problem by considering these questions:

If someone is experiencing paranoia, it is important to discuss their medications (prescription and over the counter drugs as well as vitamins) with their doctor. “Sometimes medications interact with one another or the dosages are too large,” notes Somers. “That can bring on paranoia, but a doctor can address problems and adjust the senior’s regimen to minimize issues.”

Recognizing the causes for all three behaviors and understanding what a loved one goes through while enduring hallucinations, delusions and paranoia can help you both keep calm and find solutions.

Fraud Prevention Checklist
Caregiving in the Blended Family
How to Console a Senior Who Is Afraid of Dying
Four Myths About Seniors and Computers
Does Happily Ever After Mean Healthy Ever After?
The Color of Pills May Cause Medication Errors for Seniors
Many People Would Like to Know Their Risk of Developing Alzheimer’s Disease
Understanding Frontotemporal Disorders

Ask your doctor the right questions about your Alzheimer’s diagnosis Capgras Syndrome: How to Cope with a Loved One’s Delusions
Scroll to top